I spent some time in the countryside during this month and on one of the nearby fields, where I kept coming back for a walk with a friend, I saw a beautiful brown horse. I have almost no experience with horses, but I easily feel attracted to them. Instinctively, next time I came I brought a sugar cube in my pocket that I wanted to give to the horse. I wanted to do that probably because it is something I remember my grandfather used to tell me to do to when wanting to make friends with horses. But then I hesitated because my friend started asking me if my goal was to seduce the horse. Suddenly I felt very corrupt and even guilty. As if it was a crime to feed a horse with a little bit of sugar.

I got confused and started reflecting on seduction. The word seduction itself is as acutely, as far as I know, rooted in the word to lead, so it somehow does make sense to say that seduction is connected to power or to winning over someone. It has obviously also to do with leading someone away from the established, or what is considered to be a correct, path.

In the end, I did not give any sugar cubes to the horse, and while walking back to Holbæk Art School where I was staying as a teacher, I started wondering how much seduction is connected to teaching. My goal at the school was together with my colleague Thierry Geoffroy to introduce a new way of working with art, by leading students to look at emergencies in the world and teach them to express about these important issues in artworks, often produced fast in order to keep the pertinence. Since emergency art is based on a different way and speed of doing and presenting art, it definitely needed some seduction. In the very start, with reasonable arguments, we had to persuade the students that everything in the world is not going well, that their critical artistic reflections are needed and that it is important to act. Once they realize the alarming situations surrounding them, they started working passionately, led by the energy of necessity. They were seduced. In the process, many of the students got sentimental and insecure. They were going down a new difficult path, and both feelings of victory and crises appeared along the way. We needed to seduce them to continue; we gave them different artistic methods and tools just like giving them sugar cubes to keep their energy, will and hope alive. And it worked. They continued, and they did great artworks bravely engaging their thoughts and feelings in their artistic productions in an authentic way that I have not seen for a long time, not even among professional artists.

By walking in front of the students, leading the way and calling for them, we could show that we cared and that we wanted them to succeed. I think the seduction has a lot to do with this feeling of attention and desire. So maybe the students got seduced because they could feel we, as teachers, were seduced by them. Rather then a power game, I think seduction is a two-way communication; a tension that appears when there is an attraction from two parts. Just like with a horse: I wanted to seduce him because I felt seduced myself. To give sugar cubes to a horse should maybe not be seen as corruption, but rather an expression of desire. 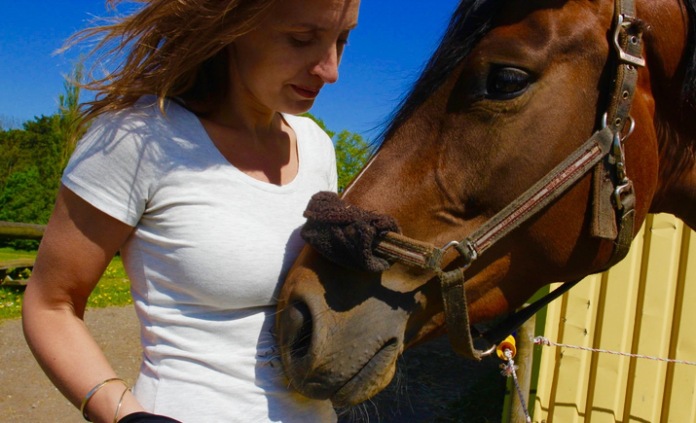 Today a very special teaching period ended. It has been an intense but also very enriching period. Artist Thierry Geoffroy/ COLONEL and I have for over a month now had an opportunity to activate some of the ideas behind The Academy of Emergency Art at two different host organizations, Holbæk Art School and Borup Højskole.

The Academy of Emergency Art is a new international education where artists are educated and trained to become emergency artists. It focuses on working in the now, on training of the awareness muscle and on the ability to express artistically about the emergencies in the world.

The Academy of Emergency Art vision was first time published in a national Danish newspaper Politiken in 2014.

Now the first students from the The Academy of Emergency Art are being graduated and we believe they will carry on the spirit of emergency art along their carriers in order to make a change in the world, which for every day is more and more in need of artists who care.

It is not an easy task for a student to constantly be taking the pulse of the developments in the society, to be spotting dysfunctions and to be responding immediately to them. It takes some very awake and brave students. But after seeing the final show today and digesting the experiences from the teaching period, I have a feeling that we actually did succeed in stimulating the students in becoming more aware and do art of great importance. I don’t know if we succeeded in creating the moment of clarity for the students, but when we talked to each of them in the evaluation interview earlier this week, we got a clear impression that all of them felt a certain transformation. They felt that they were part of a journey. They explained that they have moved from their starting point into a direction of pulsing reality. For most of them it was chocking to realize how unfair the world situation is. In the process some got sad, and others frustrated because they could not find an immediate solution for the problems that now stood clear in front of their eyes. But then we gave them more tools to keep going and producing important reflections. We pushed to make sure the journey would not stop. To keep turning their observations into pertinent artworks was the only way forward. They kept producing. Each in their different way they found a balance between the place and state of mind they came from and the new more turbulent reality they now were facing. They gained courage and hope. The artworks and collaborations between the students only got better by the end of the period.

The combination of intuition and sensibility on the one hand and knowledge and information on the other seamed to be a perfect setting for a valid artistic development.